A day out in Oklahoma Territory. By David Kimble

After upgrading my arsenal to the Xp Deus I have found that the quality of my finds has improved greatly. The second time out with this beast of a machine I found a silver quarter, A few hunts later was a 1943 walking liberty half dollar. I realize now that my biggest regret was that I had not purchased this machine earlier. I think I had set the standard pretty high on the last hunt I had. I had two days in a spot in Norman Oklahoma that really produced some great finds. My first good find on day one I pulled out a 1915 Wheat penny, followed by another wheatie in the same hole. I realized there was another signal in the hole, I located it and found that it was a 1905 Indian head penny. I then found another wheatie in the hole. All together there were three Wheaties and one IHP all in the same hole. I got about 10 foot down from that spot and hit another good signal with my Deus. It rang up as a 92 on one side and as I turned 90 degrees it then rang as an 88. I dug it up and immediately I saw a shiny silver small round something. I pulled the round shinny object out and saw that it was wiped smooth and very thin. I could make out one dime on the back. I figured it was a seated dime as thin as it was. It had to have been in circulation for a very long time. I then realized there was another signal in the hole and found a 1920s wheat penny in the same hole. I then found an old copper ring in the same hole. I was having a great hunt. 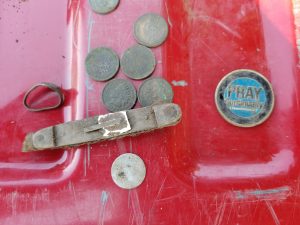 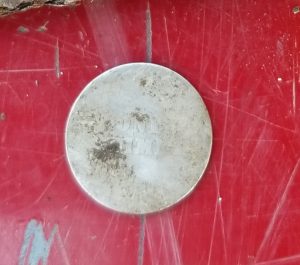 The next day I went out and hit a spot just down from that and my first hole was an IHP, after that I got a 71 signal. I dug it and it was a dog tag. I could not make out any writing on the tag but it was in the shape of a dog head and had a hole on top. My buddy and I were comparing our finds afterwards and I showed it to him. I decided to spray and scrub the tag to see if it had any writing on it, after he made the joking comment, “if it doesn’t have any writing you might as well toss it.” I scrubbed both sides when I started seeing writing. The writing said 1901 Norman O.T. Dog Tax. I was pretty excited to see that it was pre-statehood and Oklahoma Territory. After doing some research I had found that this is now the oldest known dog tag discovered in Norman Oklahoma. What a very cool find. Norman Oklahoma has a very old history. 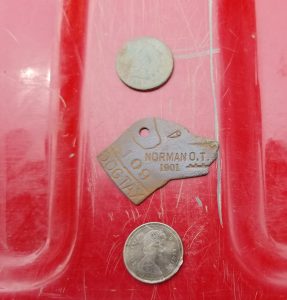 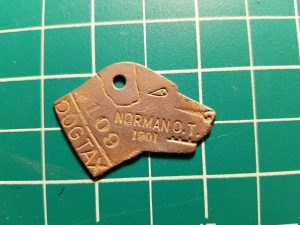