Gold in 60 seconds By Josh Kimmel

Have you ever had one of those hunts where you make that nice find right out of the gate? After making the nice find, you think “Wow” it’s going to be a great day! Sometimes it ends up turning into a stellar hunt, while other times you find out at the end of the day that you could have packed up and went home after the first find of the day. I’m sure many of you have had this happen in the past as well. Even though it’s a pleasant surprise when you find that nice coin or relic right off the bat, it’s that thought of not knowing what the next target could be, or knowing when that next good item will pop up that keeps us out there hunting all day! Another good example of this scenario happened to me again, a while back.

Not too long ago, I was approached by a person that had just recently gotten into the hobby. It seems that a few others had recommended to him to reach out to me. Although he had done some hunting on his own in the past, he sounded excited about the prospect of hunting with another person. We met up at my house and as I loaded my gear into his truck we had a brief conversation about things that people have found or would like to find. I had mentioned to him that we all love seeing stories of people making fabulous finds, or even being that person that is just lucky enough to dig up a gold or diamond ring. I had mentioned that some of us would love to be able to go out and find a gold ring every day but that in all reality there are far more other undesirable targets that ring up in that same range that many times there may be no gold at the end of the day. After some quick discussion of where to hunt we headed off, as it was already late afternoon and we were losing daylight.

We settled on a nearby spot that has been productive for me in the past. I told him that the location has yielded old coins, relics, and even jewelry. There was also the potential for plenty of clad coins but the area was massively littered with pull tabs. A lot of people don’t like to hunt this area because of all of the pull tabs and trash but if you are patient and persistent you can usually find something worthwhile. You should have seen the expression on his face when I pulled my Deus out of the truck! Many times I use the remote on an arm band for my Deus, so naturally he asked me if I had everything because he saw no screen and had never heard of a Deus. I quickly explained what the Deus was and gave a quick rundown of features. We fired up the machines and started hunting and within seconds I had my first signal. Recovering the target I announced to him that I had recovered my first pull tab already. No sooner than I stood up and started to swing my coil the Deus grabbed a second target, not even a foot away! With a slightly different sound and VDI I had to dig. My hunting friend for the afternoon heard me laugh and say “Well that’s a nice surprise”. Wanting to know what I had found I referenced our conversation from earlier about finding rings. Not having gotten a good look at it yet, my initial thought was that it was gold plated. I took a few steps over and showed it to him and he confirmed that the inside of the band was stamped 10K. I kind of laughed and sheepishly stated “It doesn’t happen every day like this, honest”. He congratulated me on my find and we ended up hunting well into dark. Although nothing other than clad coins was recovered after that, we continued to search for another good target before we called it a night.

I brought the ring home and cleaned it up, acid test, diamond test, and trip to jeweller for final confirmation revealed it was a 10K yellow gold ring with vintage diamond cluster setting. Moral of the story, whether that great find comes in the first 60 seconds or last 60 seconds of the hunt, the thing that drives us is not knowing when that next one will turn up. With the speed and performance of the Deus I have returned to this location a few times and recovered more jewelry items. I don’t know about you but I’m just fine working those pull tab infested areas! Get out there and find your history! 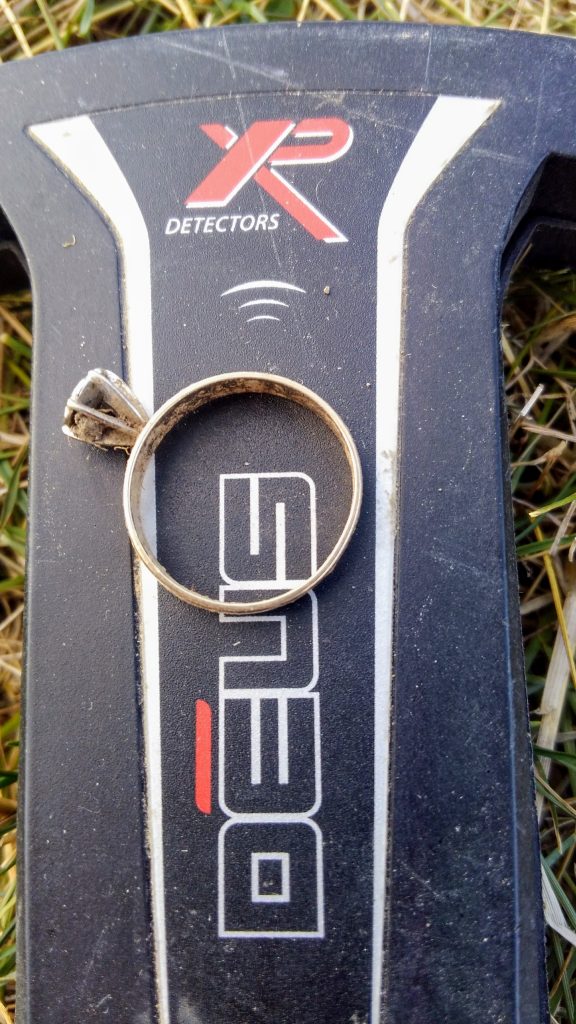