After spending the morning at a mid-19th century home site (read part one of this story here), my two friends and I journeyed to a nearby nearby permission where the home was built around 1790. Ordinarily, any home site from the 18th century gets us amped with excitement; this home was perched atop a hill with a beautiful view of the Hudson River. My imagination went wild thinking of Washington and his troops sailing up and down this river during the Revolutionary War, perhaps docking and scaling the hill to get to a nearby headquarters.

We got our XP Deus coils to the ground as quickly as we could, just waiting for the good signals to pop through. I started on the side yard, and there were plenty of signals. My XP Deus got solid high tone after high tone, but unfortunately the targets were mostly memorial pennies with the occasional wheatie. I then found something that I dismissed as a modern whatzit, but it was really a rare bottle seal closure/stopper that is marked “Sultan NO. 1 Pat. June 18 ’95. Never dismiss a find! 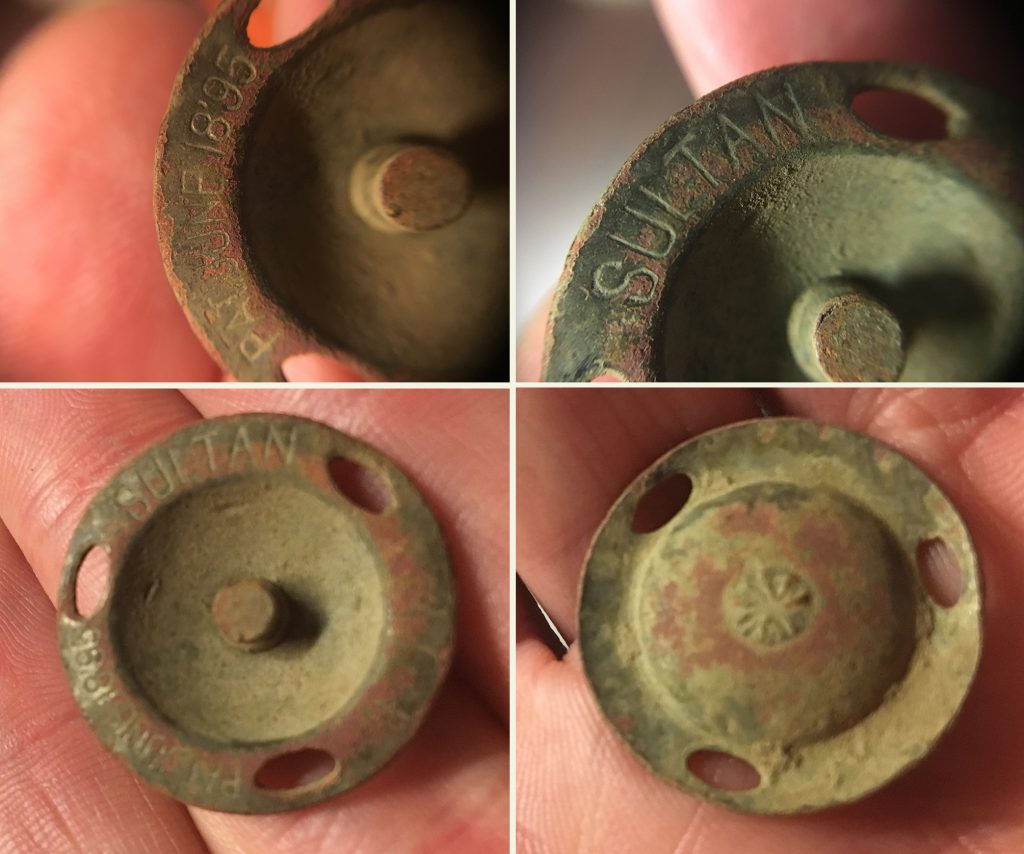 Shortly after the bottle stopper, I found a vintage dog license from the 1960s, but things got quiet. I moved on from the side yard to explore a small area behind the house. Almost immediately I found not one, but two large copper coins – hooked to each other! Upon inspection, I saw they were two Queen Elizabeth II African coins that someone fashioned into a bracelet or other type of jewelry. A very cool discovery!

After the Queen Elizabeth II coins, I went a while without a decent find. And although I found my second mercury dime of the day, it was not as old as I was looking for – but hey – I’m always happy to find silver. All I could seem to find was modern coinage. The sun was beating down on an already hot day, and I was getting discouraged. A small spark of hope ignited in me when my friend James found a beautiful, ornate silver thimble – but it was getting toward the end of the day, and I only managed to find a few more modern pennies.

Prior to leaving, my friend secured me permission to come back since I don’t live too far away. I don’t like when a property defeats me, and I was determined to return to find more of what this property had hidden beneath the surface. And within a week, I was back – on another scorching day.

I started my search in an area we didn’t focus on – the small front yard. I quickly resumed finding memorial pennies scattered about. Nothing old was coming up; not even old garbage. I then found something that I haven’t been able to identify… below is a photo and details. If you have any ideas, please leave a comment or email me at xpteamusagrant@gmail.com.

More modern coinage and trash were interrupted by a little hope – I mason jar lid. Finally! Something somewhat old. Not as old as the house itself, but it was a good sign. However, the mason jar lid was the only mid-19th-century find for the day as I continued to unearth modern pennies, foil, and scrap metal.

With time running short. I decided to try a different area of the property. Slowly scanning my HF coil over the ground, I got a very nice high tone – low 90s. I looked down to see a beautiful vintage silver ring sitting right on top of the surface! I was surprised and delighted. I asked the owner if anyone had lost the ring, but no one had to their knowledge.

I ended the day on a high note (and tone), but still felt like I should be finding older artifacts. I decided to give it one more try a week later, this time using my HF round coil. I started my search at the top of the hill, overlooking the beautiful Hudson River. I was unearthing quite a bit of rubbish, and then a solid high tone revealed a crotal bell. Yes! Something old! Not crazy old, but old enough. I knew this property had more treasures hidden within it. And as a bonus, the bell still rings! 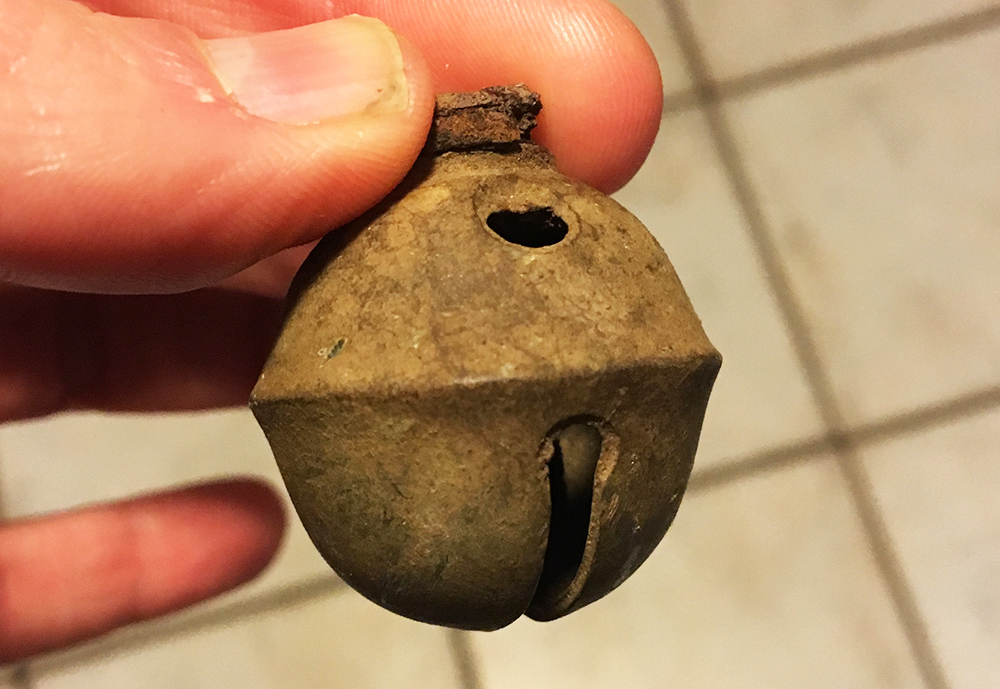 I decided to focus on this area a bit, thinking more oldies would come up. They didn’t. So I went back to the area where I found the vintage silver ring. I was rewarded with both a mercury dime and a war nickel.

I then found something that looked like a tag. I couldn’t determine exactly what it was, so I pocketed it and would figure it out when I got home. Upon cleaning, an ASPCA New York dog license was revealed, with a date of 1919. Almost 100 years old, and the oldest dog tag I’ve ever found! While not the 18th-century relic I was hoping to find, I can’t lie that I was quite pleased with it. 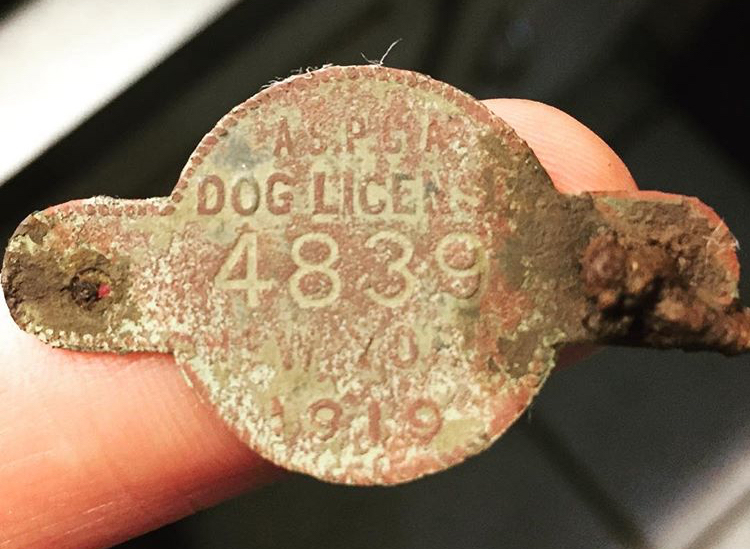 Shortly after the dog license, I found what I thought was a Buffalo nickel, but I was wrong. It was a V nickel! With a date of 1909. 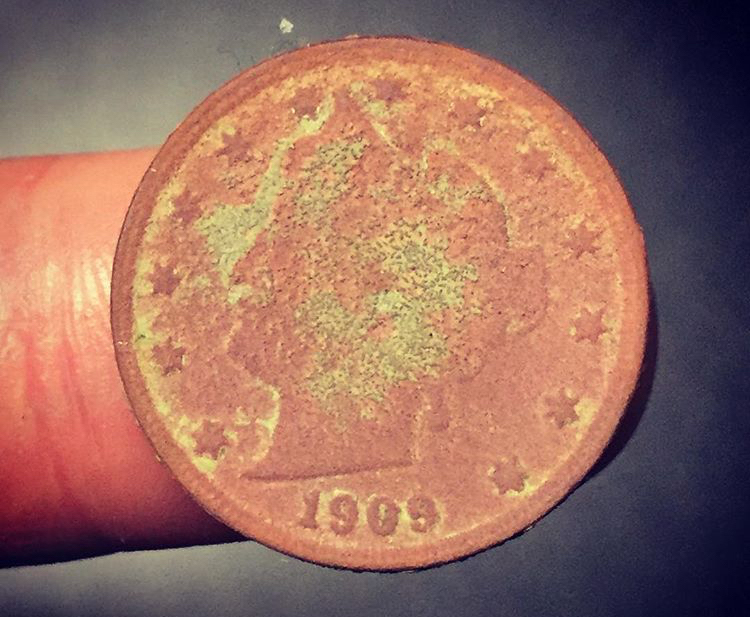 I haven’t been back to the property since that last outing, but I think about it often. While I never submit to defeat, I’m just not sure I can scrape out anything more. My guess is the property has been filled over time, even though I didn’t see any real evidence of it. All in all, it definitely produced and the home owner and tenant have been super nice and accommodating, which is treasure in and of itself.

If you’d like to watch videos of these metal detecting excursions, I invite you to my YouTube universe: