My Mini Field of Dreams By Grant Hansen

I was never a huge fan of metal detecting on fields. I like home sites where there’s a lot of noise, a lot of digging, and the comfort of knowing I scoured every inch of the property to leave nothing behind. Fields, by contrast, are vast; sometimes overwhelming, especially if you don’t have the opportunity to keep going back to try new areas. Fields can also be quiet, unlike home sites which often produce a good signal every twelve to twenty-four inches. Home sites can mean back-breaking work from all the shoveling, but I absolutely love it.

The other reason I preferred home sites was because I hadn’t been on a field that produced a lot of good finds. Of course, I hadn’t put in the historic research that has resulted in others having “fields of dreams” chock full of old coins and relics, but I thought, “Geez, I’ve detected enough fields that I should at some point get on one that produces more than one or two good finds!”

Flashback to about two years ago. Two friends of mine and I were detecting on an 18th-century church property that the owners were converting into what would be their new home. While on paper it had a lot of promise, we found nothing but modern junk. Adding to our disappointment was their neighbor telling us that over the years he had seen numerous people detecting the once abandoned property.

Luckily for us, the property owners got us permission to detect a very small field that was owned by a friend. By small, I mean one acre, tops. We knew nothing of the property, its history, or what to expect – but anything is worth investigating. So, we packed up our gear and drove a few blocks to our new spot.

Right off the bat I found a flat button, as did my friend. This was a great sign! We each wandered off in different directions, finding more 18th– and 19th-century relics. I got a beautiful high tone on my XP Deus and started to dig. After not much effort I saw a nice round copper coin. Yes! I was on the board with a King George II half penny. I focused on a small area and my Deus was singing to me. I found another King George II half penny that someone had flattened the edges to form a octagon. Perhaps it was meant to be a toy; not far from it I found a hand-made lead whizzer.

My next find was something that had me buzzing with happiness for a long time. We all have our metal detecting bucket lists. My list is pretty long, and I’m not sure a bucket would fit everything I want to someday dig up. And on our bucket lists, many of us have a rank order. A top ten, or top five, etc. Number one on my list wasn’t the most valuable, the rarest, or the most sought after by others.

My XP Deus was screaming at me to dig a solid high tone, and of course, I listened. Out of the hole came another colonial-era copper coin. But as I gently cleaned it and revealed the tell-tale shield on the reverse, I celebrated with a little dance. A New Jersey copper! I did it! I found the number-one item on my bucket list. 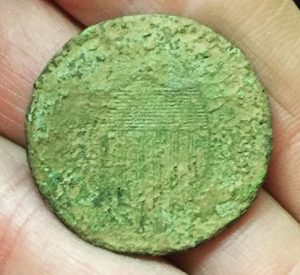 A New Jersey copper had eluded me for a long time. Friends have dug them and I have seen others online showcasing their awesome early US coinage. But for me, I found so many other types of copper coins in circulation at the time except the one I sought most.

My friends, having found some great things of their own, decided to call it a day. I was about to do the same and had driven off, but something called me back to the field. I parked my car and started swinging. Immediately I found a beautiful 1742 half real. I was shocked, and so happy I came back!

As you can imagine, I couldn’t stop thinking about this field. As soon as we got the opportunity, we returned to see what else we could find. The little small field continued to produce! In addition to more flat buttons, a blow-hole button, and another King George II half penny, I found a copper coin that I couldn’t immediately identify. With the help of some Facebook groups, I was able to ID it as a 17th-century Scottish Bawbee half penny. This was my first (and to date only) 17th-century coin found on US soil. I also found a nice buckle from the same era. 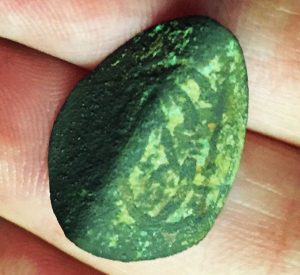 I hope to return to this field again soon. Although I’m confident we searched it well, I’m sure it’s holding more treasures. Although we could find nothing on the property’s history, we suspect there was a starter home or similar dwelling prior to more widespread settlement. It’s good to revisit sites after a while; you come with a new perspective and a new level of patience. This can often lead to good things. If I do return, I’ll let you know! 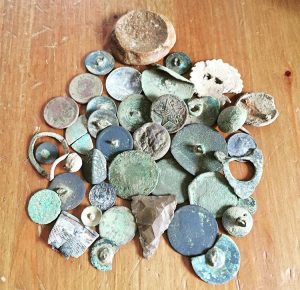 Group finds. (The Native American point and infantry button were found at nearby properties.)