Returning to the Michigan Cavalry camp By Don Westbrook

I struggled knowing that this camp still had much more to offer I couldn’t get it out of my head. There was no doubt in my mind that this cavalry camp had to be holding more than a few bullets and common general service eagle buttons. My mind was set on recovering a sword hanger, martingale, maybe some spurs, sword belt plate, or a nice Eagle C. After a 45-minute drive I arrived at camp and was ready with the Deus in hand along with the 11” coil. Since I spent most of my time previously working the heavy iron patches, I decided to hunt along the edge of the camp where the iron wasn’t as pronounced. The GMI was showing low ground mineralization and I was not hearing much trash in the ground. This prompted me to raise my sensitivity and lower my reactivity level down to 2.

The first few targets were modern trash, shortly after that I located a nice pocket of Spencer carbine bullets. The XP Deus had no problem locating them roughly 10” deep and spread across an area roughly 10’x10’. Digging a handful of dropped U.S. Civil War bullets is always fun, but I was after the uncommon stuff, the brass. Once I finished cleaning up the bullet signals I began to make my way towards another section of high ground. Then it happened, a large brass signal that nearly blew my ears off. I cautiously sunk my Predator Tool shovel into the ground, tracing out a nice wide plug so I wouldn’t run the risk of damaging the target. I rolled the plug over and saw that awesome color every relic hunter loves to see, GREEN! Right there in the bottom of the plug was a complete U.S. Cavalry spur! Instantly I let off a loud F&^% YEAH! Excuse my French but I’m a U.S. Army Infantry combat veteran, and that’s just how we roll, haha.

Once I finished recovering my freshly dug spur I continued to search the immediate area in hopes for the other spur that might have been left behind. Camp lead, bullets, and modern trash was all that remained in the area. I had a feeling that there must have been something I missed so I decided to go back over the entire section I had just detected, this time with a different frequency. At the time I was running 7kHz, so I went ahead and shifted up to 12kHz and covered the area from a different direction. After 30 minutes of searching I heard a deep faint signal about 25 yards from where I dug the spur. The signal was clean and repeatable, just a bit faint. Signals like this always get me excited because they typically end up being something good.

Once again, I cautiously dug down until the signal was out of the ground and in the loose dirt on top of the grass. I swung the coil over the loose dirt and a very loud and sweet tone came through, I knew it wasn’t a bullet and I knew it was small. Upon moving the dirt around I saw it, a beautiful Eagle C (Cavalry) coat button. This celebration was silent but involved a jersey shore like fist pump. Someone just happen to be driving by while I was celebrating and slowed down to see what I was doing. I just waved and smiled, they shook their head and kept driving, lol. I’m a firm believer in keeping the mood as light as possible while digging, especially when it comes to relic hunting. If you head out to a site with the wrong mindset, you will likely not have a very productive day. Metal detecting can be a mind game at times, keep your mind clear and your mood positive and I promise good things will happen. 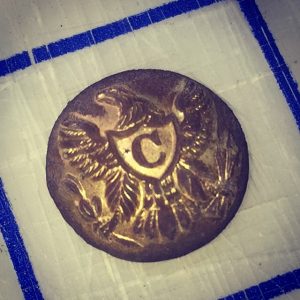