Working the iron patch with the XP Deus By Don Westbrook

I decided it was time to go on another Virginia relic hunting adventure. Whenever I travel out of state to metal detect I always try to link up with friends on location. On this Saturday morning I linked up with my buddy Jeff, near Quantico, VA. He mentioned that he was aware of a nice piece of high ground overlooking a nearby water source. On this high ground he was able to recover multiple relics over the years, but lately nothing has come out of the ground. Apparently the site was littered with iron and has been detected very hard over the years. It was deemed “hammered out.” Hammered out being a common relic hunter’s term when a site has been completely blanketed and all metal targets have been removed. I asked him If he had searched this site with an XP Deus, his answer was no. Knowing this I was very excited to get up there and start searching with my XP. Shortly after the machine was balanced and the hunt began I noticed how highly mineralized the soil was, thanks to the mineralization meter on the Deus remote. I also noticed how much iron was in the ground, an insane amount of iron. There was so much iron that you couldn’t take one step without hearing it through the headphones. So I dialed back my sensitivity and ramped up my reactivity to start working that heavy iron patch.

The first few targets were a mixture of shotgun shells and small bits of camp lead. Even though I was recovering items I was not after, this was still a good sign. The fact that targets were coming out of the ground when the site was supposed to be hammered was exciting. The XP was hearing targets in the ground that other machines have missed in the past. Then I started pulling out a musket ball here and there. This was a great sign; it confirmed that my settings adjustments were working well. After about 45 minutes of searching, it happened! Down roughly 8” under the surface and completely surrounded with iron was a nice little flat button. I could spot the shank of the button protruding out at the bottom of the hole. Along with the button were a mixture of small iron particles and multiple square nails. The XP Deus was able to pick out that 8” deep flat button buried amongst all of that iron! Once I removed the button from the earth and gave it a gentle brush, I noticed a cannon. I had recovered an early 1800’s “Roughly 1815”one piece Federal Artillery coat button! The only reason why I was able to recover this awesome button was due to the fact that I was able to adjust the machines processor speed by bumping up the reactivity. Where other machines struggle in the heavy iron patches, the XP Deus excels. 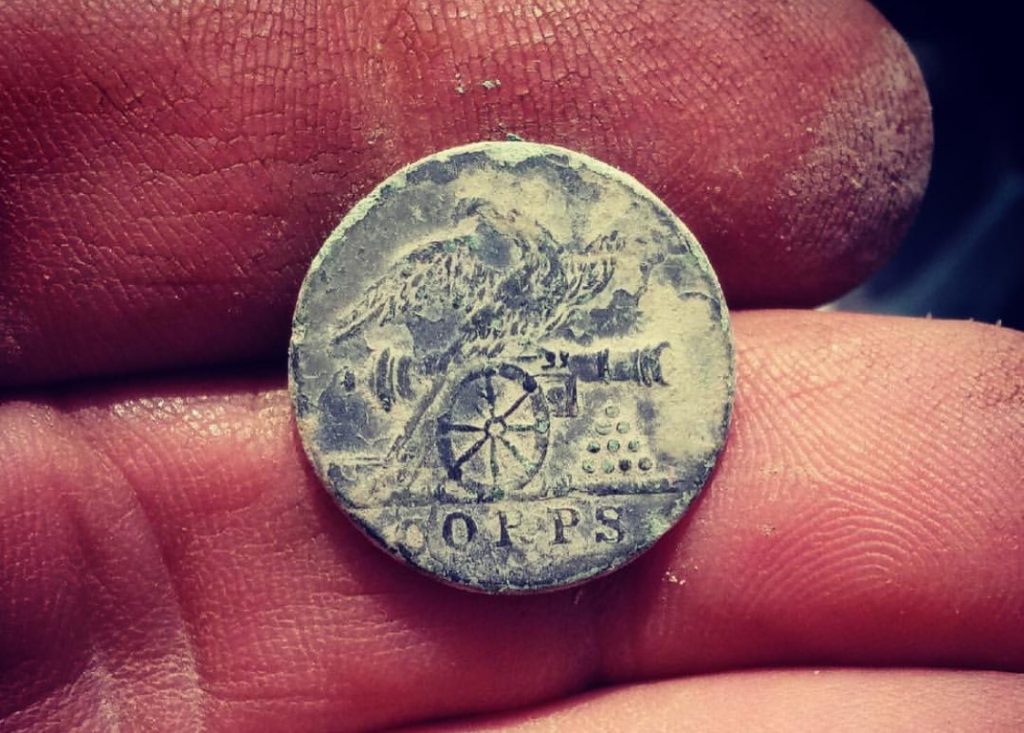