My last outing of 2018 was December 31. But 2019 didn’t pick right up and I didn’t get out to detect until March. While it was cold and windy, and we knew the fields were relatively quiet, it was good to jump back in.

My friend James was kind enough to bring me back to acres upon acres of colonial-era farmland. Too many acres to cover thoroughly, so the fact that he’d visited the property multiple times (once accompanied by me), didn’t dissuade me. Even though signals were few and far between, James had found some good stuff, including 6 or so colonial-era copper coins. I myself had found my first shield nickel on my first outing, and I was excited to return.

Per our usual M.O., we arrived at the fields shortly after the sun rose from the horizon. It was windier and colder than I expected, so I bundled up as if I was an arctic exploration. We geared up and started swinging. The first field was really quiet, but my second target was banging, and turned out to be something very cool – a Kass Forge hoof pick/horseshoe tool. I had never seen anything like it! 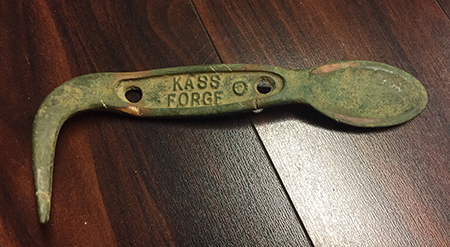 We quickly made our way to another field, and I concentrated on a noisier section. I had to suffer through some very good signals that turned out to be modern garbage, but I persevered. I knew something good would come up, and I was right! I found a nice, really old button – late 17th-century to early 18th-century. Score! Any time I find something that is potentially from the 1600s gets me really excited.

After getting a great signal, I dug my hole and saw big green roundness. A coin!? I was hopeful. But as I investigated more closely, I could tell that it was too big to be a coin. It turned out to be a big whatzit, so I put it in my junk pouch and carried on.

A few minutes later I got another really good signal. When I turned over the plug I saw a big coin! This time I was certain. I didn’t know what it was, so I pulled out my phone to record. As I started removing away the dirt, I was stunned – could it be – silver? It was! I had found a 1910 silver Barber half dollar! This was my first half dollar of any kind, and I was stoked. I grabbed my walkie talkie to tell James the good news, and then went back to searching. 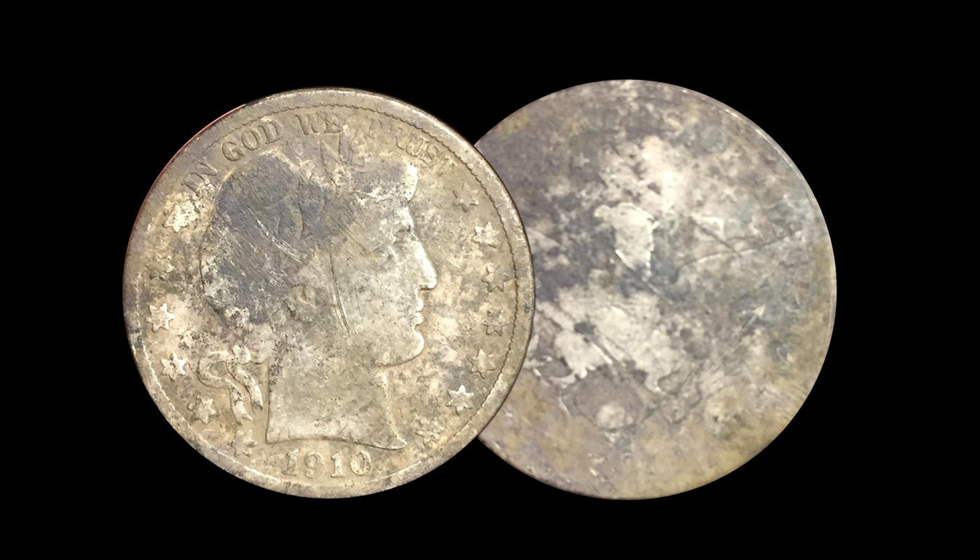 The field stopped producing, so we regrouped and tried an adjacent one. This one was eerily quiet, and we didn’t stay on it long. On to the next! My first target on the next field turned out to be a colonial copper. Sadly, it’s so toasted that I couldn’t get a proper ID on it. But it was still a positive sign and a good find!

We planned to spend more time on this field, especially since I had just found something colonial, but the land owner drove over to say hi. He had recently got himself an entry-level detector and we encouraged him to join us and we’d help him learn. He suggested we search the yard behind his house – the house that was built in the mid-1700s. Um, yes please! I later found out that the original structure was built in the 1600s, but was replaced by the “newer” 18th-century home. James started off walking side-by-side with the land owner and spent a great deal of time helping him out. I periodically did the same, as we helped him understand what the good targets were and how to dig a plug. James called him over to swing over a good signal, and then suggested he dig it. Well, it was indeed a good signal as it turned out to be a mid-19th-century large cent. The land owner was over the moon!

I didn’t find anything of note surrounding the old home, despite my best efforts. I’m looking forward to hit the unsearched areas of this property to see what else it might have in store.

Here’s a video of my better finds. Please forgive the sound quality – I wasn’t lying when I said it was windier than I expected!